We’re developing a new Land and Water Plan, including specific rules and limits on water and land use in your FMU/rohe.

We will be in your area in February 2022 to meet with your community and we'd love to hear what you want to achieve for land and water resources in your area.

In this first stage of consultation, we're keen to hear what you know about your catchment, and to share what we know from the science. We will then have group discussions about options for managing freshwater and land in your area.

There will be a follow-up meetings in June 2022 and September 2022, when ORC and Kāi Tahu will present and discuss a preferred approach to water and land management with you. Check back here for meeting details nearer the time. You will also be able to give input online.

The preferred approach will then be drafted into the FMU and rohe chapters of the proposed Land and Water Regional Plan. Once this is notified, you can make a submission saying what you like about the plan or how you think it can be improved. 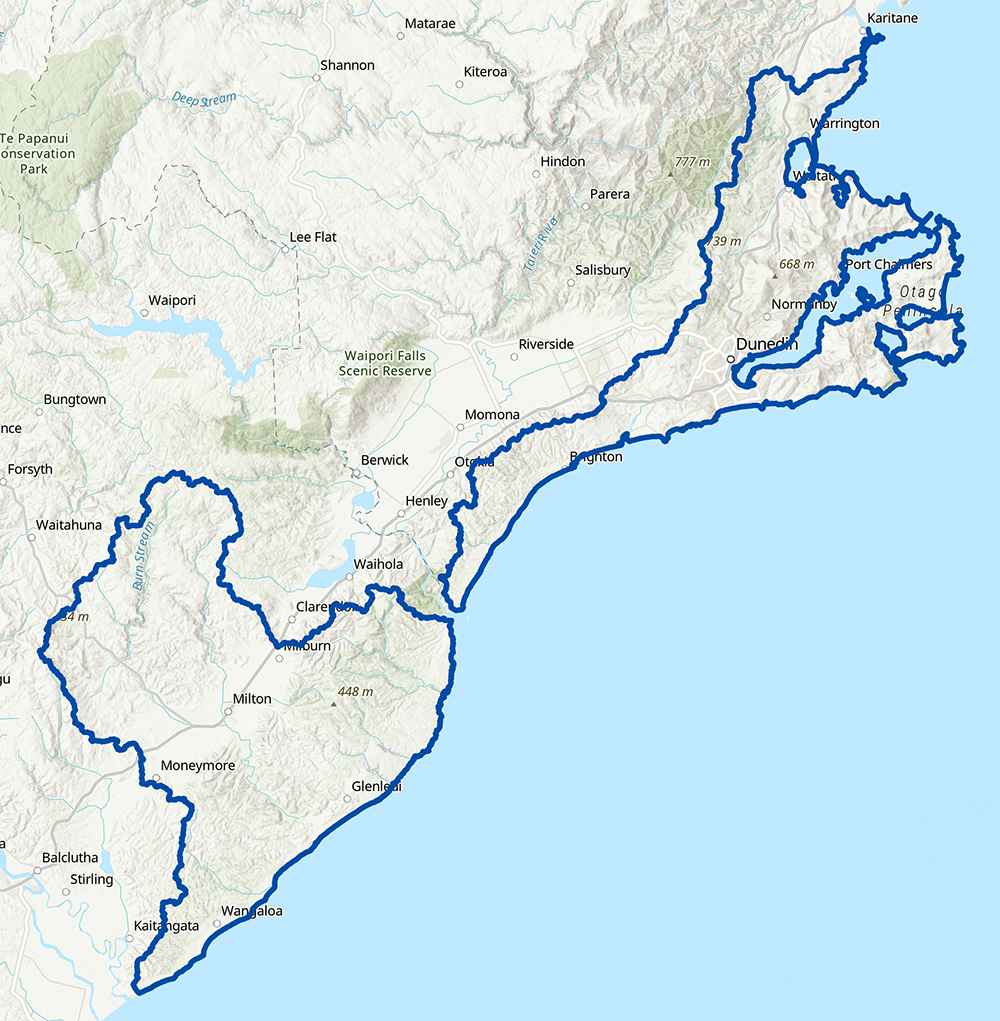 The Dunedin Coast FMU spans over 1,000 square kilometres of urban and rural land and is home to more than 125,000 people.

It includes a number of areas including:

With the exception of Tokomairiro River catchment, many of the catchments are predominantly short river or stream catchments, some associated with estuaries and/or wetlands, especially where the Taieri River cuts through.

Maori settlement dates back to around 1250 AD with moa supported a growing population. The rivers, estuaries and lagoons in the Dunedin coastal area, together with the Otago Harbour, were significant mahika kai resources that supported numerous Kāi Tahu settlements in the area.

The whaling industry, then the gold rush in the mid 1800s attracted many Europeans (predominantly Scottish) and eventually lead to the establishment of Dunedin City.

Water quality in this area strongly reflects the nature and intensity of surrounding land use. The urban streams have catchment-specific water quality issues due to the presence of infrastructure and stormwater runoff from high levels of impervious surfaces.

The Leith and Kaikorai Streams have upper catchments covered in indigenous trees and grassland, while their lower catchments are largely urban environments consisting of streets and buildings, parks and open spaces.

The lower catchment of the Tokomairiro has agricultural intensification (sheep, beef and dairy farming as well as some cropping), as well as flowing through an urban area, whereas the upper catchment has a high proportion of forestry.

Water quality in all these catchments deteriorates as it travels through more intensive landscapes in the mid to lower catchment.

There are high ecological values in the area, including forests, estuaries, wetlands, wildlife (such as Hoiho, albatross, sealions, seals,red bill gulls and black bill gulls), marine habitats and threatened species of galaxiids and lamprey.

Landuse in the Dunedin Coast FMU is predominantly grazed grassland for wool, lamb, beef, dairy or deer farming production. There are also areas of forestry.

Other important industries are fishing, tourism, and the urban and industrial development in Dunedin and smaller centres like Milton.

How can you stay up-to-date?

We’ll be sharing project updates and information on this webpage and in our monthly newsletter On-Stream – sign up here.

You can also contact your local ORC councillor here.